CloudFront is a content delivery service offered by Amazon web services(AWS). CloudFront serves static contents (images, audio, video etc) using a global network of more than 28+ edge locations. Using these edge locations, CloudFront accelerates delivery of content by serving the cached copies of the content objects from a nearest edge location. Service is highly reliable and designed to be used with Amazon S3 or any other custom origin server.

CloudFront can also serve the dynamic or interactive content but current support is quite limited compared to similar services such as Akamai. Given that CloudFront is more cost effective than Akamai [1] and service is evolving very rapidly in terms of features, I would highly recommend the CloudFront. 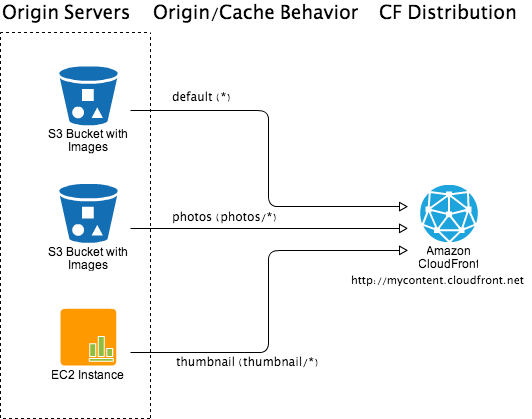 When a file is requested to a CloudFront distribution,

All web browsers are capable of downloading resources such as CSS, JavaScripts, images etc in parallel. Traditionally, web browsers limit the number of simultaneous connections a browser can make to one domain [2][3]. For instance, Internet Explorer 7 only allows two parallel downloads per server.

Still there is lot of opportunity to improve. For instance, a normal e-commerce web page downloads more than 80+ resources during a single page view - eventually slowing down the page load time. This is where domain sharding technique comes very handy.

Using CluouFront CNAME alias feature you can map multiple CNAMEs on a given CloudFront distribution (upto 10 CNAMEs). For CNAME aliasing we can use Amazon Route 53. On application side, you have to enable domain sharding logic which basically requires filtering all your static/media URL references in your view/template and randomly mapping to one of the CNAME alias. For instance, in Django you can write a Django middleware or template processor which will replace any MEDIA_URL or STATIC_URL element in template to one of the CNAME alias. 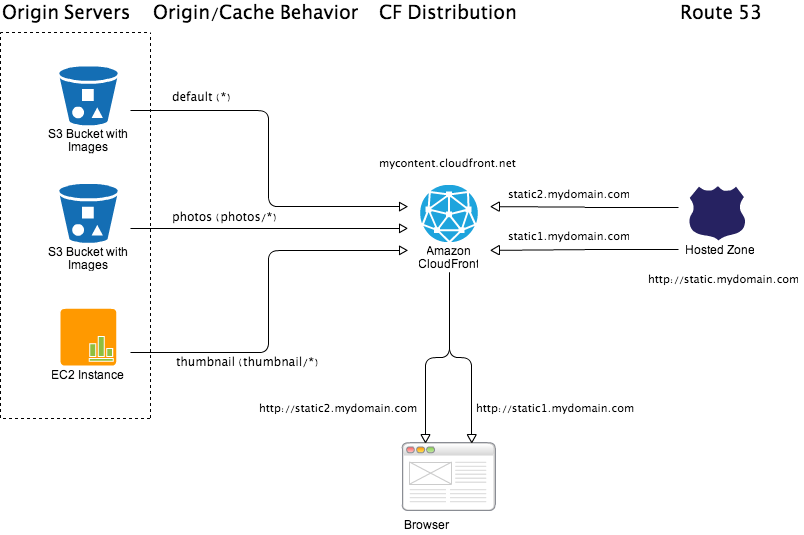 Please note, currently domain sharding is not possible for HTTPS requests due to SSL certificate mismatch issues. To bypass this limitation you can use two different CloudFront distributions with same origin servers and rules. 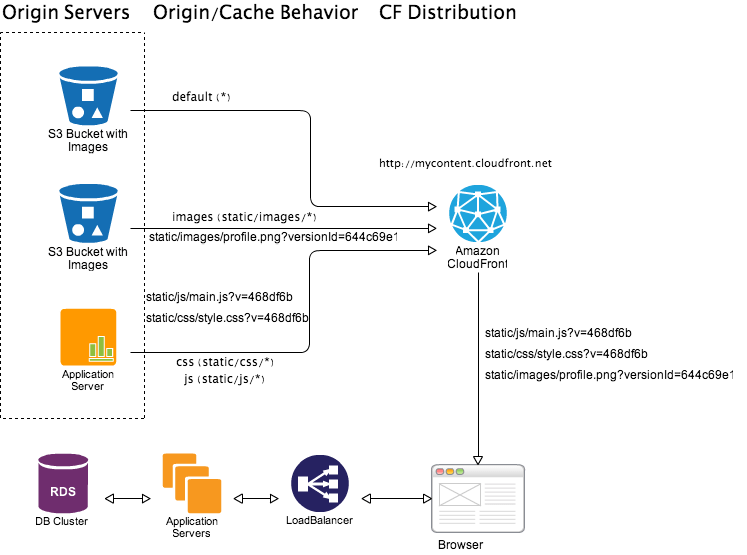 This works pretty much same as first approach but without query string and with improved caching. This is more suitable for the application content types(CSS/JavaScript). New object paths looks like,

File Name As Unique Key Based On File Content

In this approach file name is an unique hash key generated from file content. This is suitable for both application and media content types.

For images/videos content, before uploading to Amazon S3 you can generate MD5 hash for a given file and use it as file name for uploading the content. Using this approach you can also avoid the content duplication as it is possible to compare the contents using MD5 hashes.

For application content, you can use a pipeline which will minify and combine CSS/JavaScript files and then generate a single file for CSS/JavaScript with file name generated using MD5 hash of file content. 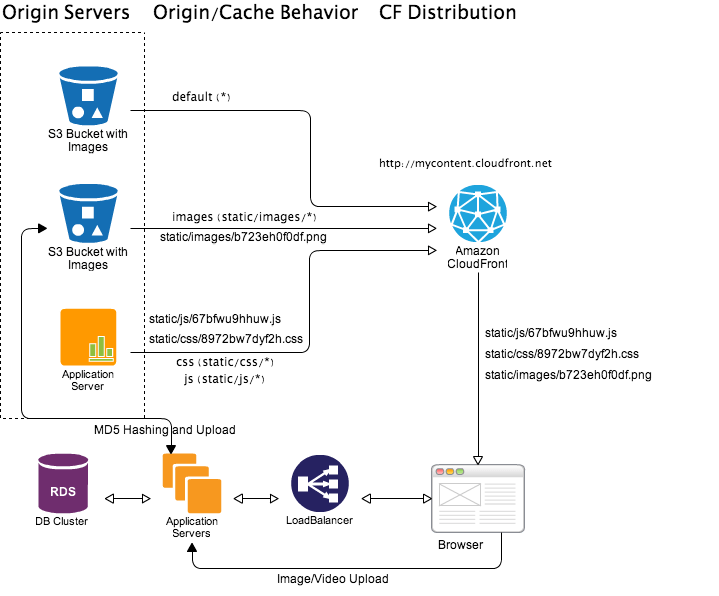 Using custom origin it is possible to do dynamic image thumbnailing and video encoding. An example workflow depicted in following diagram. 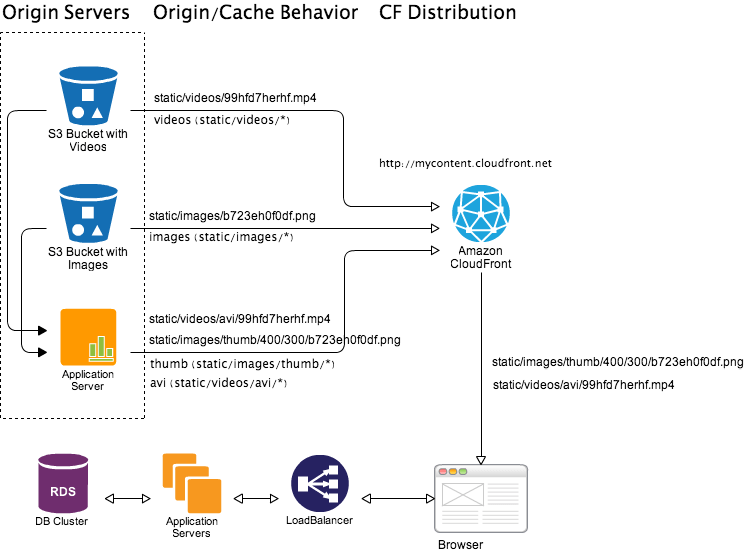 Same kind of workflow can be used for dynamic video/audio encoding. Only difference will be the required time to complete the round trip which will be longer than image thumbnailing. Unfortunately dynamic encoding may be practical for very small sized files only. Using Amazon Elastic Transcoder and Amazon SQS with a custom origin server we may improve overall performance but still it is not as efficient as batch encoding.

Compressed content is served faster and uses less bandwidth. Unfortunately for compression CloudFront relies on the origin servers. Amazon S3 does not perform the compression as well. Although Amazon S3 can store both gzip and non-gzip versions of the file in the same bucket. When uploading gzip file to Amazon S3 we need to set Content-Encoding to gzip. It is recommended to use a custom origin server to compress the content on-the-fly. Most of servers like Nginx, Apache etc support on-the-fly gzip compression. 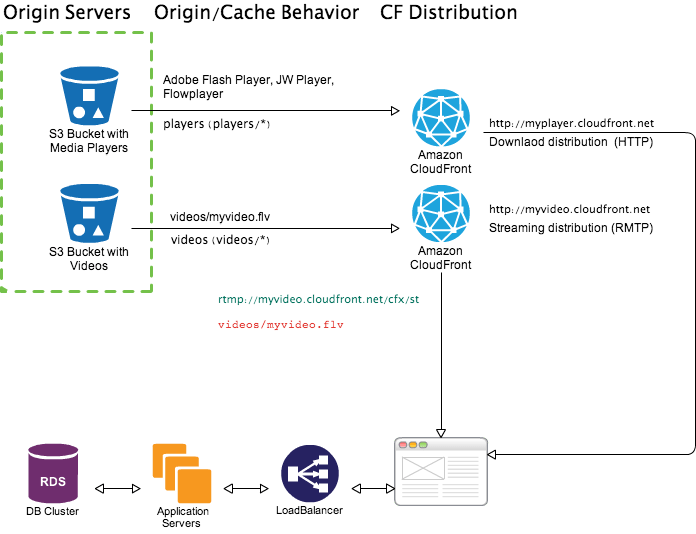 To configure the media player with correct path to the file we have to provide streamer URL plus file path. Streamer URL is base CloudFront URL plus cfx/st. For rmtp://myvideo.cloudfront.net/cfx/st/videos/myvideo.flv 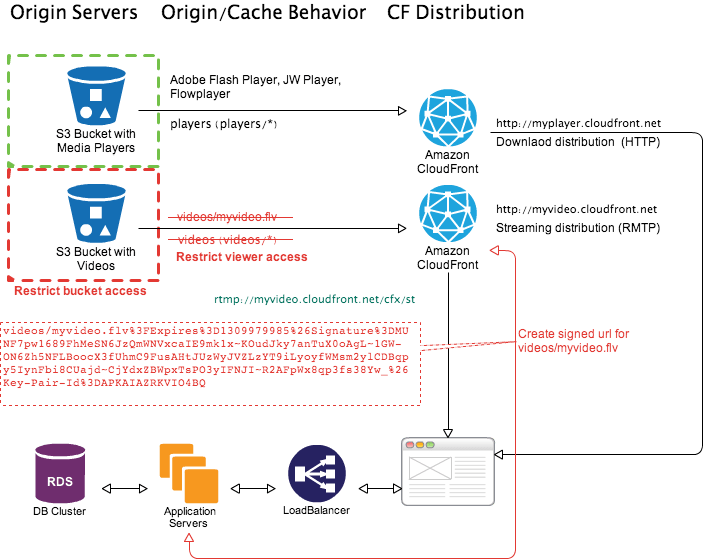 Let say you are streaming a movie (illustrated above). To access the content for 24 hrs end-user requires to pay for streaming. To protect your video content you have restricted the bucket access and viewer access. This prevents anyone from bypassing CloudFront signed URLs. Once end-user has completed payment steps your application server creates CloudFront signed URL for the video content and redirects end-user to download and load the media player in the browser which is pre-configured to stream video content using signed URL. Now this video content is accessible for 24 hrs. After 24 hrs signed URL will be invalid and end-user can not play the video. Off course in 24 hrs period they can play the content as many times he or she want. 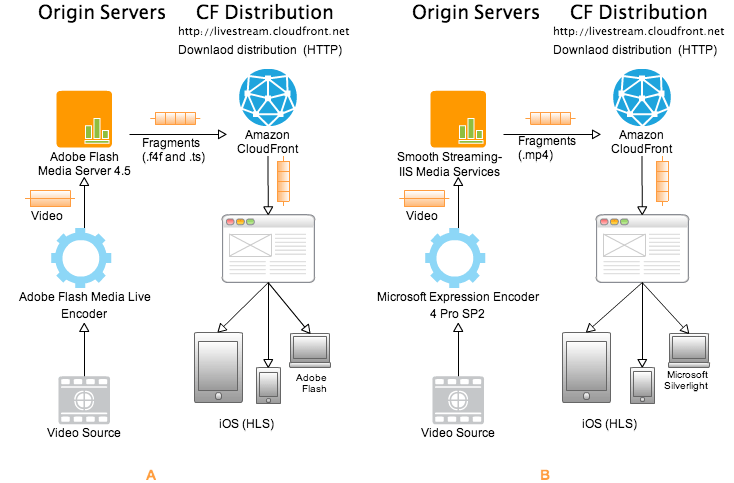 Each solution relies on an encoder and a media service or server as described in above image (A: Adobe’s Flash Media Server 4.5[10:1] and B: IIS Media Services). Encoder takes live video as input and convert video into right format. Then video is pushed to origin server (media service or server). Origin server then breaks the video into a series of smaller files (called segments or fragments) that are cached in the CloudFront network. It all happens in real time. Now each fragment can be encoded on different bit rate and depending on client's network conditions an appropriate fragments steam with optimal bit rate is served from CloudFront.