MVC for data science is here

Data science as it stands certainly need it's own MVC moment, and it starts with machine learning. PredictionIO - An open-source machine learning server made an early attempt in this direction using a DASE architecture which includes D (Data source/data preparator), A (algorithms), S (serving) and E (evaluator) components. Like MVC which has modularise the model, view and controller components - PredictionIO's DASE architecture helps you to modularise DASE components so developers and data scientist can build deployable prediction engines more quickly. In addition, in line with MVC components, DASE components maintain clear separation-of-concerns. This allows data scientists to swap and evaluate algorithms as they wish without impacting the rest of platform typically managed by the developers. DASE modularity is also appealing for developers. It offers developers flexibility to re-use the codebase and integrate prediction engine with a variety of applications using APIs.

The engine is responsible for making predictions. A prediction engine includes all DASE components into a deployable state by specifying

One engine predicts only one thing.

Each engine processes data and constructs predictive models independently. Therefore, every engine serves its own set of prediction results. For example, you may deploy two engines for your mobile application: one for recommending news to users and another one for suggesting new friends to users.

Although the engine is a core part of PredictionIO and focus of this article, the overall ecosystem consists 3 key building blocks, 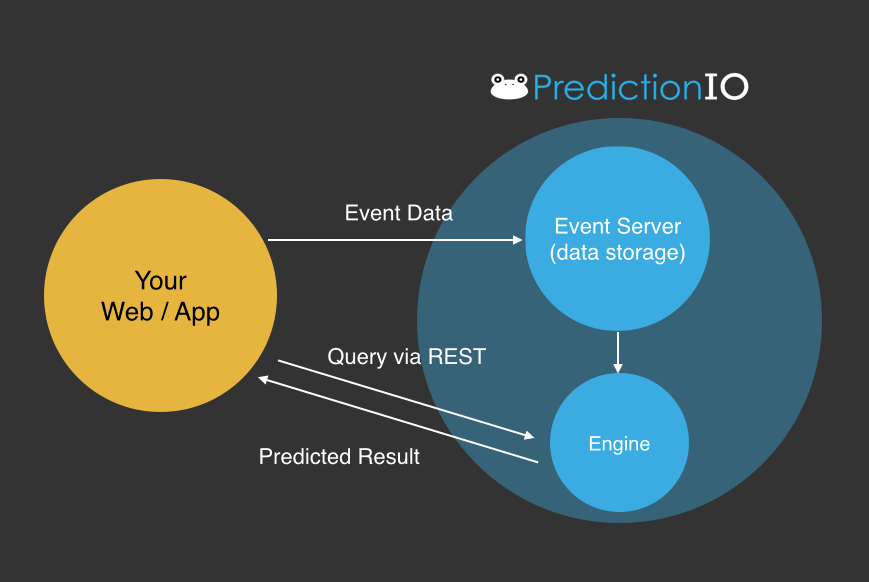 External applications such as mobile or web apps,