Mesos allows multiple services to scale and utilise a shared pool of servers more efficiently. The key idea behind the Mesos is to turn your data centre into one very large computer. Think in this way, if you have 5 nodes with 8 CPU Cores and 32GB RAM and 10 nodes with 4 CPU Cores and 16GB RAM - using Mesos you can run them as one single large compute unit of 320GB RAM and 80 CPU Cores. With Mesos rather than running multiple applications on separate clusters , you are efficient distributing resources across multiple application on a single large compute unit.

Who is using Mesos?

Apache Mesos has been used in production by Twitter, AirBnB and many other companies for web-scale computing. Twitter is running several key services including analytics and ads. Similarly AirBnB uses Mesos to manage their big data infrastructure.

Similar type of systems Borg and its successor Omega are used by Google. Both Omega and Mesos let you run multiple distributed systems atop the same cluster of servers.

Mesos is leveraging features in modern kernels for resource isolation, prioritisation, limiting and accounting. This is normally done by cgroups in Linux, zones in Solaris. Mesos provide resources isolation for CPU, memory, I/O, file system , etc. It is also possible to use Linux containers but current isolation support for Linux container in Mesos is limited to only CPU and memory.

Mesos architecture[1] consists of a Mesos Master that manages Mesos Slaves and frameworks that run tasks on Mesos Slaves. Master is in soft state[2] with one or more stand-by managed by ZooKeeper to implement the failover mechanism.

A framework is an application running on top of Mesos. A Mesos framework normally uses Mesos APIs (C++, Python, Ruby, JVM, Go) exposed by Mesos kernel. Using these APIs a framework interacts with Mesos Master to accept and register the resources allocation on Mesos Slaves.

Number of Mesos frameworks is growing very rapidly. Here is a list of popular frameworks,

There are two notable frameworks currently available to support batch processing and long-running services: Chronos (Unix cron equivalent) and Marathon (Unix init.d equivalent). Marathon is a meta framework and it is used by most of other frameworks and application including Chronos.

Marathon can run web applications like Rails[3], Django and Play[4]. Marathon provides a REST API for starting, stopping, and scaling these applications (scale-out and scale-in).

Chronos is a distributed and fault-tolerant cron/job scheduler. Chronos supports custom Mesos executors as well as the default command executor sh. Using a RESTful JSON API over HTTP frameworks and applications can communicate with Chronos.

Writing your own framework

Writing your own framework on top of Mesos is quite easy. First you create your scheduler in C, C++, Java/Scala, or Python by inheriting from the corresponding Scheduler class.

Then you write your framework executor by inheriting from the Executor class.

Apache Mesos can be used as an SDK for building fault-tolerant distributed frameworks on top of it[5]. You can port existing distributed systems or new distributed applications on Mesos using a custom framework wrapper in less than 100-300 lines (approach described in previous section) without involving any networking related code. 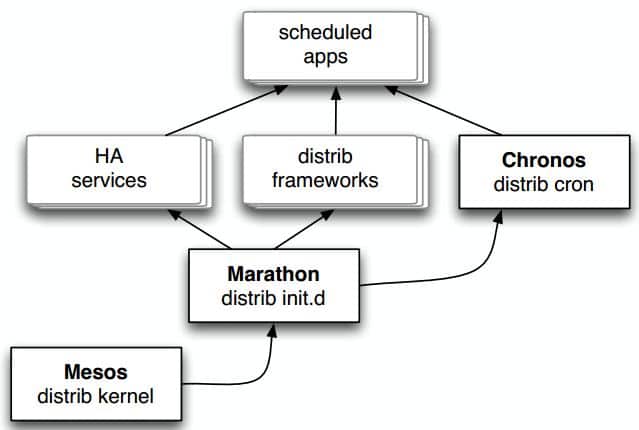 Similarly for Storm, we have to map Nimbus (JobTracker of Storm) and the Supervisors (TaskTrackers of Storm) on Scheduler and Executor (Mesos graph).

Why are current DAM offerings so uninspiring?